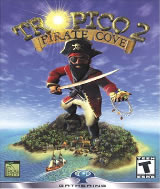 Build-a-lot 2: Town of the Year

Strap on your boots, and get ready. Tropico 2: Pirate Cove builds on the humorously addictive play of Tropico, and also adds in several innovations and changes to the rules. The economy is a reverse of the original: in Tropico you made money by selling stuff you made on your island. In Pirate Cove, you get rich pirating the goods other people have made. Plus you keep the captives too. Keeping the island economy moving falls largely to them. Captives from plundered ships do the hard work on the island, so the pirates can enjoy the delights of shore leave and re-supply their ships.

The pirates are characters you'll spend time developing, as you build up mean fighting crews with specialties in boarding, cannon fire, or harassment with muskets. Take Blackbeard, Anne Bonny and a host of other buccaneers through a campaign spanning 100 years of piracy in the Caribbean.

mad2101 | 5
Pros: Great management game
Cons: Building many of the same things.
Comments: You are in charge of a secret pirate hideout and it's not easy. It is an island building simulation game with a twist.There are many goals and different ways to achieve them.

AmberRays29 | 5
Pros:
Cons:
Comments: This is one of the best games on here. I have played this so many times. Love sandbox, wish they would come out with more from tropico!