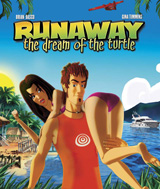 Runaway: The Dream of the Turtle

Hawaii - an idyllic island paradise. It´s the spot Brian Basco and Gina Timmins have chosen to take a well-earned vacation. An impromptu daytrip to a remote and relatively uninhabited island goes awry, however - Brian forces Gina from the plane, giving her the only working parachute. Brian luckily survives the plane´s crash landing, but Gina has disappeared, setting the stage for a highly entertaining story. In Runaway: The Dream of the Turtle, players will travel the world, from Alaska and Hawaii to the depths of the sea and the sky above. Become immersed in a tongue-in-cheek story where you'll meet a crazy cast of miscreants in order to solve a mystery too weirdly entertaining for words in this title that pays homage to all that was great about the glory days of graphical adventure games.

Lerner | 5
Pros: Great graphics, funny characters, engaging storyline
Cons: Character movement between locations
Comments: In the style of classic adventure games like Leisure Suit Larry and Pirates of Monkey Island, Runaway: The dream of the turtle takes you on an exciting adventure across the world, from Hawaii to Alaska to the middle of the pacific in search of sunken pirate ships. The storyline has its own quirky logic that keeps you moving along with it, and the characters have great smarta** humor that will keep you laughing out loud from the beginning. Sci-Fi, pirates, lost islands, surfer dudes and bikini babes, who could want more from an adventure game? There are adult themes, so not recommended for the younger set, but do yourself a favor and meet Brian and Gina, they need your help! A final note, make sure and read the advertising board on the pirate ship...