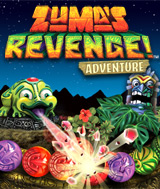 Survive a newly evolved world of Zuma where evil tiki bosses rule the land in this single-mode edition of Zuma's Revenge. Conquer over 60 levels of Adventure mode by firing stone spheres to destroy the deadly stream of balls. Stay sharp and avoid hidden traps as you match three or more balls to make them disappear. Slide and hop for smarter shots; hit targets for exotic bonuses; detonate explosive power-up balls; battle six imposing tiki bosses, and guide your agile amphibian to victory!

RetChief64 | 5
Pros: Challenging scenes
Cons: None
Comments: Awesome follow on to Zuma. Enjoyed the fact that you can actually move the frog shooter around more than in the previous game. Good Graphics and challenging levels.

Ikeshia | 5
Pros:
Cons:
Comments: i love all the other zuma's hope they make some more come on with the zuma i love them all when i don t have nothing to do that will keep my attention for long periods of time